South Central Kentuckians
of the Year {2022}

Charles and Carolyn Hardcastle, longtime residents of Warren County, exemplify generosity and passion for charitable endeavors through all their philanthropic efforts. Their formula for success comes from their deep sense of caring for people and hard work.

Charles and Carolyn are both alumni of Western Kentucky University. Charles graduated with a Bachelor of Arts degree in History in the year 1955 and Carolyn with a Master of Arts program in 1973. Charles, a native of Warren County and Carolyn, originally from Michigan married in 1959. Charles served in the US Army from 1955 to 1957, reaching the rank of Captain. He was on active duty with the 100th division of US Army from 1961 to 1962 during the Berlin Crisis.

The Hardcastle’s love for their community is evident in the numerous charitable initiatives they have undertaken over the years focusing on welfare of the underprivileged and other educational programs.

One such example is the contribution of $1.5 million to the Kentucky Museum and other associated programs housed within the Kentucky Building. “WKU is incredibly grateful for the philanthropic support Charles and Carolyn provide, demonstrating their strong connection to and belief in our institution,” said WKU President Timothy C. Caboni. “Their personal contribution will touch the lives of many Hilltoppers for years to come.”

They also established “The Charles Hardcastle Endowed Fund for Excellence” at WKU to further their educational causes. The Kentucky building will bear the name “Charles Hardcastle Kentucky Building” to honor the Hardcastles for their very generous contribution. Charles believes in the importance of History and showcasing it through the Museum’s platform is one way of doing that. “History is important, and it has a way of repeating itself,” said Charles Hardcastle. “It is essential to remember our history and keep things that tell those stories. The Kentucky Museum is a resource for the city of Bowling Green and the community, and I wanted to make sure it was always accessible.”

In addition to his passion towards preserving History, Charles has a desire to create a legacy of giving as well. His legacy at WKU is firmly established with the charitable contributions of the couple. The Kentucky Building facility, related University programming, including the Kentucky Museum, the Kentucky Library Research Collections, the Department of Library Special Collections, and the Kentucky Folklife Program will all benefit from the financial support provided by The Charles Hardcastle Endowed Fund for Excellence. The Fund’s mission is not only to ensure that the Kentucky Building thrives in all aspects as stated earlier but also benefit student centric programs that include new positions and internships for WKU students and or exhibitions produced by students.

Hardcastle said that he was inspired to make this gift to his alma mater to “pay it forward.” “The youth are the future of the world, and we need to make sure they are taken care of,” he said. “I didn’t get a scholarship when I came to Western, but my tuition was only $35. This is a way for me to pay it forward for others.”

In keeping with their goal of supporting the University and the community, Charles and Carolyn Hardcastle are members of the Cupola Society and received recognition for 48 years of contiguous giving to WKU. They are a part of many local civic organizations and are longtime members of the Henry Hardin Cherry Society and the President’s Circle at WKU. They are Lifetime Members of the WKU Alumni Association and serve on numerous Boards and committees at WKU contributing invaluable support towards leadership and strategically placed initiatives.

Mr. Hardcastle’s list of accomplishments is long. He was a Warren County magistrate and served on the WC fiscal court for 12 years. He was elected as the Mayor of Bowling Green and his term lasted from 1984 to 1987. His belief that one person can make a difference was a motivating factor behind his Mayoral role. He contested to bring “harmony” to the city government. As a mayor, he pledged to respond to the needs of all citizens in all sections of Bowling Green and conduct public business honestly and fairly.

A loyal Rotarian, Charles Hardcastle as a member of The Bowling Green Rotary Club began the Adopt-A-Class Scholarship Fund in 1991. His idea was simple--to adopt a single class in an elementary school with a high percentage of free and reduced lunch and give them the hope of a college education through guidance and mentorship.

A donation challenge was established by Charles and Carolyn Hardcastle in 2007 at the Bowling Green Noon Rotary Club. The program is titled “Giving Hope” and will guarantee college tuition and books to any member of a selected class that completes high school with their current classmates. The students will be able to receive scholarships to attend Western Kentucky University or Southern Kentucky Community and Technical College.

Equally accomplished is Carolyn Hardcastle. Her story is woven throughout the fabric of our community, as is the impact of her goodwill.  Carolyn was a leader in the Junior Women’s Club and the Jaycee-ets. During her time at WKU, Carolyn taught mathematics and instilled confidence in her students.  She has been and continues to be a role model for friends, family, and our community.  She has left her mark in so many ways, including shaping the way our community connects with nature at Lost River Cave.  Her impact and generosity are recognized there where you will find the “Carolyn Hardcastle Bridge to Nature.” 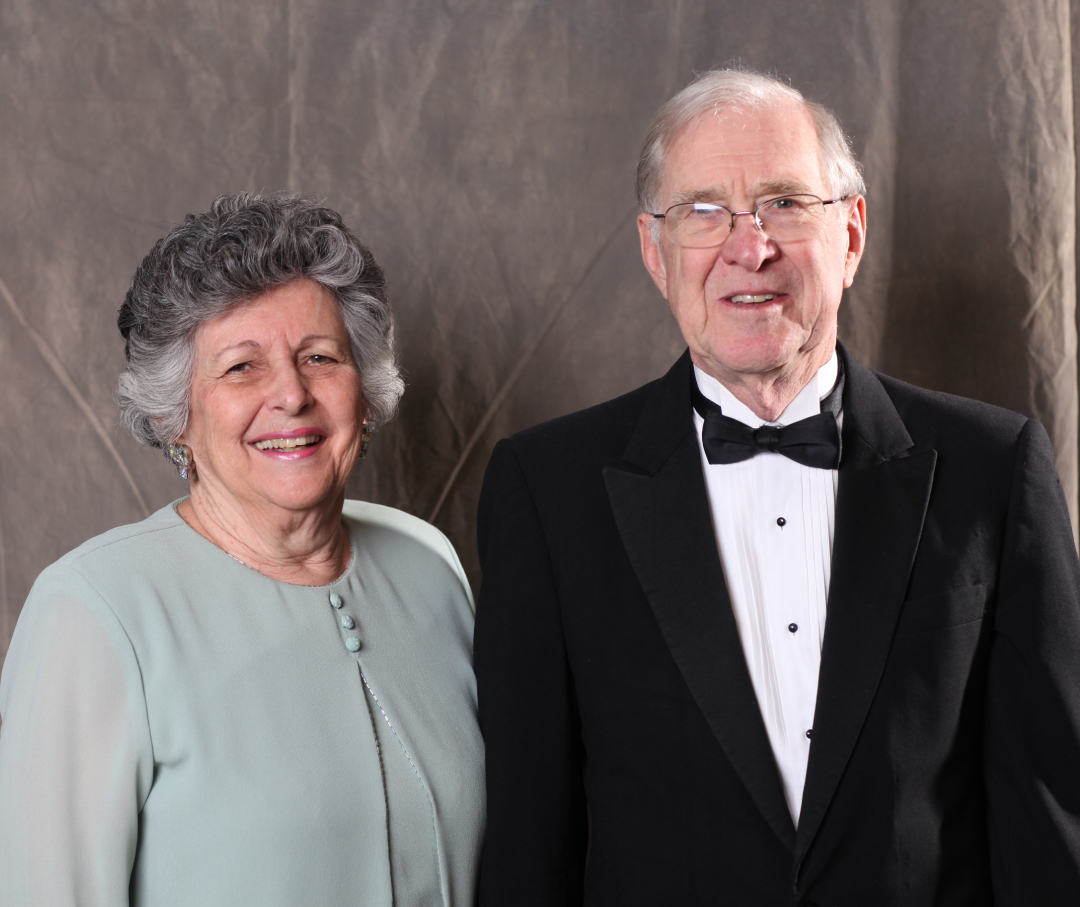 Mr. Hardcastle is currently the President of Consolidated Paper Group Inc. which was founded in 1955. The company distributes paper and janitorial supplies from locations in Bowling Green, Owensboro, Paducah and Nashville.

The History Behind the Limestone Award

Four Irish immigrants, John J., Peter J., Thomas J. & William J. Murphy established a limestone business in Bowling Green, KY, circa 1886. They were stone masons and engineers known as the MURPHY BROTHERS COMPANY. The brothers operated a stone quarry where they removed and cut limestone for many of the initial infrastructure projects in South Central Kentucky and other parts of the Commonwealth.

Many of the buildings, first constructed more than a century ago, remain today as a testament to the foundation upon which they sit. Some of the most notable are State Street Methodist Church and the Burton Memorial Baptist Church. In addition to buildings, the Murphys quarried and cut the stones for the street curbing for many communities including Bowling Green.

When John J. Murphy’s grandson, G. Michael Murphy began his career in construction in 1976, any opportunity to salvage these “stones of the foundation of our community” was preserved as a memory of their family’s business beginnings in South Central Kentucky.

Just as the philanthropic work of the individuals who receive this award are foundational to their community, the base of this award is salvaged limestone and is intended to represent the purpose of The Community Foundation of South Central Kentucky.